Always remember: If you’re alone in the kitchen and you drop the lamb, you can always just pick it up. Who’s going to know?
– Julia Child

Today my husband unexpectedly came back from the market with lamb shanks. I order these regularly when we eat out, but I have never made them at home as they have never been readily available in my small town grocery store until now (this is, after all, the heart of cattle country). In the spirit of trying something new, here is my braised duck-leg recipe adapted for lamb shins, the cheapest, toughest and decidedly most delicious cut on the lamb.

To start, coarsely chop up a large red onion, 2 ribs of celery and 2 large carrots, and throw them all into a large oven-proof, flame-proof pot, preferably one with a lid.

Okay, this is the wrong kind of onion; it’s a Walla Walla, sweet and mild, too sweet and mild, in fact, for a long braise. Red onions have more complexity and flavour when caramelized.
Too bad…
It’s what I have.

And the baby carrots aren’t quite right, either…

Actually, “baby” carrots, the Hollywood-has-beens of the vegetable world, are not baby carrots at all, but mature carrots that have been nipped and tucked and plumped with filler (in this case, water) in order to masquerade as baby springs.

The magnum opus of California carrot farmer Mike Yurosek, (who grew weary of culling the two-thirds of his crop that failed to meet exacting consumer standards for root vegetable rectilinearity), this trend towards flawless orange vegetation started back in 1986 with a second-hand industrial green-bean cutter that transformed Yurosek’s crop of cock-eyed carrots into the diminutive, uniformly tapered glossy tangerine cylinders that we know and love today.

I buy these for one reason: my kid will eat them.  In my house, this is not trivial.

The extra water they absorb during processing, however, makes them less than ideal for roasting—or even imparting flavor to a braise—but does that mean I’m going to make a special trip to the store to buy unrefined, rudely proportioned garden carrots with their root hairs still intact?

Using a small saucepan, squash 8 to 12 cloves of garlic to pop them out of their skins. 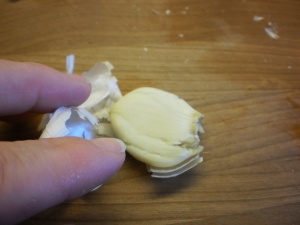 Why, yes, that is a lot of garlic; in contemporary post-Twilight pop-culture, one can’t be too careful…

Rinse the garlic off the bottom of the pot with cold water. While you’re at it, rub your hands over the pot’s surface, the molecules in the stainless steel will bind with the sulfur in the garlic and take the smell right off your hands…

Throw the garlic into the pot.

Speaking of pots, finding a covered pot large enough to hold six lamb shanks in a single layer had me in a bit of a quandary; they wouldn’t fit into my regular Dutch Oven and my turkey roaster is a little too flimsy to de-glaze on a gas flame.

So I raided my husband’s camping gear.

The downside? With the lid on, it weights 25 lbs.

This is what you have so far:

Throw in a sprig or two of fresh thyme and rosemary, liberally season the shanks with salt and pepper and set them on top of the vegetable mixture.

Adjust the oven rack to the lowest position and roast the shanks, uncovered, in a 425 degree oven for 45 minutes, turning them over half-way through. Keep an eye on the vegetables; if they start to scorch add 1/4 cup of water to the pot.

Once the shanks are nicely browned on both sides, take the pot out of the oven and set it on the largest burner on your stove top. Temporarily remove the  shanks from the pot (another advantage of the Camp Chef Dutch Oven, the lid doubles as a shallow roasting pan, it’s the perfect size to hold the shanks, and it’s going to get dirty anyway).

Add half a bottle of dry red wine and 3 cups of chicken stock to the pot.

Turn the heat to medium high and bring the liquid to a simmer, scraping all the brown bits up off the bottom with a wooden spoon. 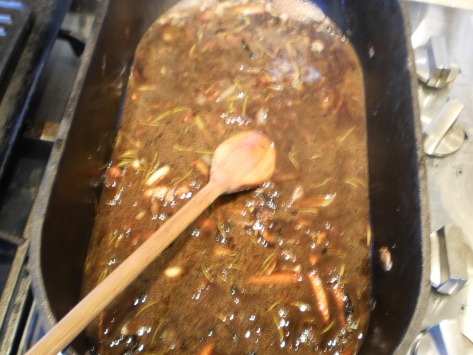 Return the shanks to the pot (the liquid should come half-way up the shanks), cover the pot with a layer of aluminum foil (this will make a better seal), and anchor it with the lid: 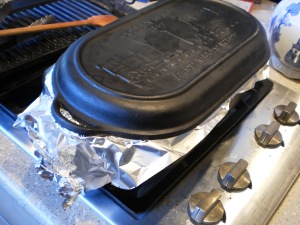 Put the pot back in the oven, reduce the heat to 275 degrees, and braise for about 3 hours (or until the meat yields easily to a fork, which will vary slightly, depending on the size of your shanks). Turn the

shanks over half-way through cooking, and if the liquid gets scant (less than 2 inches), top it up with 1/2 cup of chicken stock.

Remove the pot from the oven, and transfer the shanks to a large, pre-warmed serving platter. Strain the remaining liquid through a fine-mesh sieve, (here we begin to see the disadvantage of a 25 pound Dutch oven; on the other hand, even straining the liquid out of a Staub is a four-hand endeavour that should require a double indemnity accident clause on your insurance policy), pressing on the solids with the back of a spoon to extract every last drop. Skim the fat off the liquid, transfer it (the liquid, not the fat) to a gravy boat and pass it at the table with the lamb shanks.