“Everything should be made as simple as possible, but no simpler.”
– Albert Einstein

While Occam’s Razor is a valuable tool, when we misuse it, we fall into the trap of the reductive fallacy, an explanative approach in which highly complex processes are reduced to their elementary components to such a degree that any sense of cause and effect gets lost in the argument.

To wit: “Fewer than half of Ontario’s elementary schools have a health and physical-education teacher, raising questions about efforts to stem rising obesity rates among schoolchildren.” Globe and Mail, March 18, 2013

Physical exercise, (and by implication, physical education), is absolutely crucial to the maintenance of a healthy body, but it is not a panacea and it does not work in a vacuum. The factors that contribute to the growing obesity crisis in Canada are social, psychological, political, economic, cultural, evolutionary, environmental, and biochemical all at the same time, and trying to address this incredibly complex phenomenon simply by mandating thirty minutes of physical activity a day in schools is over-simplistic to the point of naïveté.

First, consider our obesity epidemic from an evolutionary perspective. Despite the blog wars raging between the “carb” people and the “no-carb” people, a growing body of evidence suggests that human metabolism evolved primarily in the era prior to organized agriculture, and that for the first 190,000 of Homo sapiens’ 200,000 years of genetic evolution, our species subsisted on wild, grass fed meat and fish (and their respective fats), as well as naturally occurring (

not cultivated) fruits, vegetables, and nuts. Not only did 95% of human genetic evolution occur in the era prior to the production of cereals, in addition, the feast-or-famine nature of the hunter/gatherer society created “thrifty” genes wherein the ability to store energy as fat became a desirable genetic trait that was passed to future generations by the process of natural selection. Because wheat and barley gradually appeared in the human diet over the last 10,000 years or so, human beings have been eating grains for 5% of their total existence on the planet, and are therefore genetically better adapted to eat fruits and vegetables as their primary source of carbohydrates. The first impacts of cereal production on human health were seen in the nineteenth century with the advent of the industrial revolution and the invention of high-speed rollers mills, which processed grains to the consistency of talcum powder, effectively removing any fiber from the cereal and significantly speeding up the rate at which the carbohydrate was digested and absorbed.

Moreover, “modern wheat is no more real wheat than a chimpanzee is an approximation of a human. While our hairy primate relatives share 99 percent of all genes found in humans, with longer arms, full body hair and lesser capacity to win the jackpot at Jeopardy, I trust you can readily tell the difference that 1 percent makes,” (Davis, 2011, p. x).

Not only has the trend towards mechanization and refinement continued to the present day, its negative impact on human health (hugely exacerbated by the Harvard-led anti-fat campaign of the 1980’s) has resulted in an obesity problem of pandemic proportions. At a general biochemical level, the typical Canadian diet makes, and keeps, us fat because it interrupts the normal regulation of the glucose/insulin cycle. How quickly a carbohydrate is absorbed into the bloodstream is measured by its “glycemic index”, with glucose itself (at a score of 100) determining the relative speed of all other foods. The more refined a carbohydrate, the higher its glycemic score; the higher its glycemic score, the faster it enters the bloodstream; the faster it enters the bloodstream, the faster the pancreas releases insulin (a hormone) in order to drive down glucose levels by escorting excess blood sugar into muscle and liver cells. Constantly eating high glycemic carbohydrate foods leads to chronically  elevated insulin levels, which in turn are directly correlated to obesity. Not only does insulin cause blood sugar to drop rapidly, which signals the brain (whose preferred fuel source is glucose) that it’s time to eat (even if you’ve just eaten), but insulin is the hormone responsible for regulating energy storage in the human body.

Perversely, the high levels of insulin that remain in the blood after ingesting a high glycemic carbohydrate load prevent the storage cells in the muscles and liver from re-releasing previously stored glucose back into the bloodstream. While it’s true that the body (especially the brain) does need a steady supply of carbohydrate to function properly, we have all but replaced the genetically preferred seasonal fruits and vegetables in our diets with calorie-dense, high-glycemic, refined carbohydrates that lead directly to insulin resistance, increased hunger and weight gain. For this reason alone, the standard formula of “calories eaten, minus calories burned, equals net weight gain” is over simplified, and we cannot address obesity (childhood or otherwise), simply by increasing the “calories burned” or decreasing the “calories eaten”.  What we eat is as important as how much we eat and more important than how much we exercise.

And still, it’s not that simple…

Recent research also suggests that obesity is hormonally correlated to the circadian rhythms that regulate sleep. While increased gaming and Facebook time have both been fingered as an “inactivity” factor as it 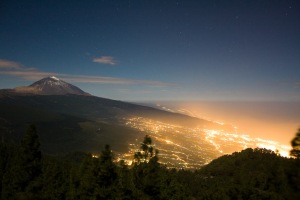 relates to weight gain, studies also indicate that our ever-increasing exposure to light (and the negative effect of light pollution on the body’s production of the sleep hormone melatonin) in conjunction with the abnormal sleep patterns generated by our “24/7” lifestyle negatively impact the hunger hormones leptin and ghrelin, both of which are also under circadian control. Especially disturbing, given our propensity for nightlights and digital alarm clocks, is the fact that exposure even to very dim light during sleep has the same effect (although the brighter the light, the greater the weight gain). Indeed, even on its dimmest setting, my newly acquired clock radio glows such a violent shade of green that one might reasonably conclude a UFO had landed in the bedroom, and I have relegated it to the bottom shelf on the bookcase where it casts a smaller “shadow”.

or maybe the dust mites are having a party…

At an individual biochemical level, weight gain is even more complex, because there are also genetic variations within our population that affect our hormonal responses to carbohydrate intake. A significant percentage (approximately 25%) of the population experience a blunted insulin response to elevated blood glucose, and, as a result, are not genetically predisposed to insulin resistance. By the same token, about 25% of the population is extremely carbohydrate sensitive, and cannot eat refined carbohydrates in any amount without gaining weight. To complicate matters still further, there are other individual hormonal responses unrelated to insulin production that further drive weight gain.

Over the course of human evolution, for example, the brain has developed so that it produces the neuroendocrine transmitter, dopamine, after the successful ingestion of food. Commonly known as the “reward hormone,” dopamine plays a key role in human motivation, and it appears to be a primary player in completing our internal atta-boy reward circuit. Research has indicated, however, that the dopamine receptors in the brains of obese persons are compromised, as compared to the dopamine receptors in those test subjects with a normal BMI, leading to the hypothesis that obese persons feel compelled to overeat in the same way that heroin addicts feel compelled to mainline when their dopamine levels are low. Interestingly, one way that dopamine receptors are up-regulated is through calorie restriction, which may explain why gastric bypass surgery remains the only proven long-term solution for morbid obesity. In obese persons with disrupted dopamine receptor sites, the obesity problem cannot be overcome with physical activity alone.

Switching lenses from the micro to the macro, consider next the influence of politics and economics on rising obesity rates. Crop production and food manufacturing are big business (as is the weight loss industry), and school catering services and vending machine operators are in it for the money, not out of an altruistic concern for our children’s health. The crop production and processing industries that constitu

te local and global agribusiness, along with their respective lobby groups, all have a vested (read, monetary) interest in keeping us fat. To paraphrase biochemist Barry Sears (and to use an American example), the “eat less” message is a difficult one for agribusiness to digest: “Today agribusiness produces more than 4,000 calories per day for every American. For Americans to eat less, every sector of agribusiness (except the fruit and vegetable sector) has to make less money.” In light of the millions of dollars that American agribusiness (led by the sugar industry), donates directly to political campaigns and lobby groups, it would take a remarkable politician, with the political will of Athena to lobby for meaningful changes to the American food pyramid.

The politicization of our food supply also has huge implications for the way obesity divides along socio-economic fault lines, and unsurprisingly, obesity is far more prevalent in lower income households. Calorie for calorie, eating well is expensive, and refined carbs and sugar are cheaper than lean meats, fruits and vegetables (according the USDA, the cost of fruits and vegetables rose 120% between 1985 and 2003, while the cost of sugar and sweets rose less than 50%). In addition, for the “working poor”, who often struggle to feed their children by working two jobs, the time constraints and transportation issues involved with shopping for bulky food items such as fruits and vegetables make it even more prohibitive. On the other hand, research also indicates that once household incomes top $120,000, obesity rates start to rise again, as people in higher income brackets also spend more time working and less time shopping and cooking.

Other environmental factors also drive eating habits; companies spend billions of dollars luring adults and children alike into eating foods they know are unhealthy, and millions more on products development, manipulating their foodstuffs with salt, sugar, and a host of chemicals to make them more addictive. Given that we make more than two hundred food decisions each day, (mostly on auto-pilot), we are unconsciously influenced by marketing, our immediate environment and the people around us far more than our own hunger.

And I haven’t even touched on the psychological issues that drive emotional eating, or considered time-constrained parents who create a life-long pattern by stifling their babies’ cries with a bottle, whether or not said babies are hungry. Rather, I have very briefly touched upon (and grossly oversimplified) some of the issues that contribute to our growing obesity epidemic, not because I think that physical exercise is unimportant, or because I think it shouldn’t be implemented into our schools, but because in trying to explain an extremely complex set of circumstances by isolating a single “cause,” we have created a reductive fallacy in which public education (now there’s a surprise), takes the fall.

The trend towards lower levels of physical activity is itself a nebulous social phenomenon that is difficult to link to a single cause: increased mechanization; urban sprawl (including the rise of neighbor-unfriendly Monster Houses) that discourages old fashioned “playing outside”; the uptick in parental paranoia generated by increased media coverage of sexual predators; the exponential growth of electronic entertainment, in addition to crunched school budgets that squeeze out gym time, all converge to keep children inside and sedentary, rather than outside and active. Moreover, the absence of a dedicated physical education teacher is not the logical equivalent of “no gym class.”

Adiposity is truly a multi-faceted affair and identifying any given factor as “the” cause of obesity is tantamount to trying to understand a food web by studying a single organism. To make any sense of it, and to have any hope of improving it, we must examine the ecology of human obesity as a whole.

Bray, M.S. and M.E. Young. (2006). “Circadian rhythms in the development of obesity; potential for the circadian clock with the adipocyte.” Obesity Reviews. Retrieved March 27, 2011 from: http://www.ysonut.fr/pdf/Circadian-rhythms-developpement-obesity.pdf