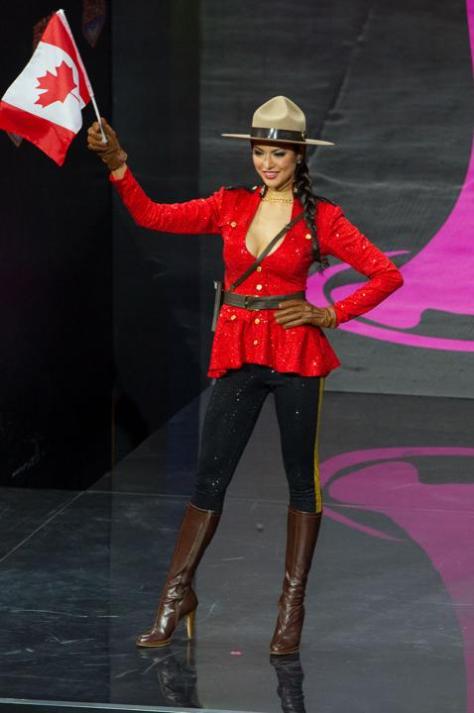 “There is a Princess in every girl. To be a Princess is to always look your best.” – Barbie 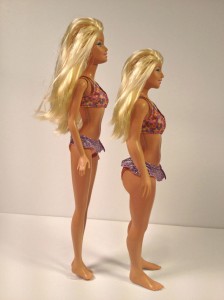 Besides the gargantuan head, Barbie sports feet reminiscent of Tang Dynasty Imperial China, arms fashioned after an anorexic spider, and a neck that looks like an early prototype for the giraffe.

In fact, to actually attain Barbie’s mythic  proportions, the average 19 year old female would need to gain over 6 inches in height and surgically remove her bottom ribs, her trapezii, half of her triceps, most of her forearms, her hamstrings, her calves, plus her glutei maximi. She would also need an ear reduction, a brow lift, a jaw line shave, a nose job, a neck reduction, a breast augmentation and a tummy tuck.

While fans laud the doll as a female-centered creative outlet for young girls , empirical research confirms that Barbie’s buxom proportions are not only unhealthy, they are biologically and statistically unattainable, with fewer than 1 in 100,000 women likely to be blessed cursed with her peculiar weight distribution (Ken’s physique, on the other hand, is a relatively common 1 in 50). But still they try, which is, perhaps, the point, because western females begin to internalize the cliché that “nothing tastes as good as skinny feels,” around the age of six, and research has consistently correlated Barbie with increased body dissatisfaction and eating disorders in young girls.

Whichever side of the debate you land on, however, there is little doubt that Barbie’s unrealistic and idealistic proportions epitomize men’s neurobiological evolutionary preference for low waist-to-hip ratio, smooth hairless skin, big eyes, pre-Raphaelite hair, and large pronounced breasts, all of which are signs of reproductive viability.

As do Maxim models.

As do Playboy Bunnies.

Mass media and iconic status are potent envoys of sociocultural ideals and in this sense, the power of Barbie far outweighs the impact of Maxim or Playboy because she is the stuff of legend, an iconoclastic ideal that undergirds our very concept of feminity—in the so-called First World, at least—through a never ending stream of movies, books, toys, housewares, clothing and costumes.

Well, that plus the fact that we market her to five year olds…

And this only makes the latest addition to Barbie’s Dolls of the World Series all the more discombobulating because when gender controversy collides with harassment scandal, it creates the Perfect Storm:

Ladies and Gentlemen, all the way from Canada, wearing “the ancestral clothing of her country,” put your hands together for RCMP Barbie... 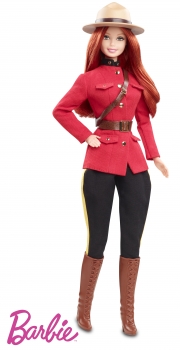 Did anyone in Ottawa stop to consider the ramifications of packaging a Mountie in a manikin whose “life size” waist is the approximate circumference of Bob Paulson’s bicep, whose body weight is too low to support menstruation and who is endowed with enough flowing red hair to cover a yak?

Did I say yak?

Yes, I get it. Mattel is in this for the money (at the height of Barbie’s popularity, she sold at a rate of 120 dolls per minute, worldwide). But what is the Force’s motivation in marketing this product through The Mountie Shop, aka, the “official retailer of the RCMP,” and why would an organization previously billed as “Canada’s Finest,” charge—breasts first—into such a dubious political and ethical quagmire?

According to Dr. David Frederick, gender researcher and Assistant Professor of Psychology at Chapman University, California, there is a direct connection between seemingly benevolent female sexual stereotypes and overt, hostile sexism, which includes anything from “cat calling to job discrimination to date rape.”

Hmmm… now where have we seen those allegations before?

No good decision was ever made in a swivel chair.
– General George S. Patton

On August 10, 2012, Foothills Municipal District peace officer Rod Lazenby was beaten to death during the lawful execution of his duty on an acreage near the hamlet of Priddis, about fifty miles from my home. A 35 year veteran of the Royal Canadian Mounted Police, Lazenby retired from the RCMP in 2006 and for the  last three years, worked as a community peace officer where he often dealt with animal complaints.  Last Friday, Lazenby attended the home of dog breeder Trevor Kloschinsky regarding a complaint about the latter’s thirty-plus Australian Cattle Dogs, and in a bizarre series of events, Kloschinsky (allegedly) ambushed and severely assaulted Lazenby, loaded the injured officer into his own patrol car and drove him to the nearest Calgary Police Service office where he directed a CPS officer to arrest Lazenby for trying to steal his dogs. Lazenby was rushed to hospital with life threatening injuries and pronounced dead upon arrival. Kloschinsky has since been charged with first degree murder.

Recognizing that a peace officer had been killed in the line of duty, Calgary Police Service lowered their flags to Half-mast at all their districts. Local fire departments followed suit.

Not so the Royal Canadian Mounted Police.

The flags at the Duncan Building (RCMP Southern Alberta District Headquarters) in Calgary, as well as several RCMP detachments that actually operate within the Foothills MD remained staunchly upright this past week.

According to RCMP provincial spokesperson Sgt. Patricia Neely, “because he wasn’t a serving member, we have no say on that…. That’s a decision made for the RCMP by the Alberta premier’s office. Besides,” she added, “ we have thousands and thousand of former members—our flags would always be lowered.”

Is that what’s known as thinking on one’s feet?

Because we aren’t talking about all former members of the RCMP (of which I am one), we are talking about Rod Lazenby, a retired member—with ten more years of service than the current commissioner, I might add—who was killed in the line of duty while working for a law enforcement agency that partners directly with the Royal Canadian Mounted Police.

As a municipal police force, operating out of a municipal building, Calgary Police Service has the luxury of making its own decisions regarding Half-masting in the wake of a peace officer’s death. As a federal organization, however, wherein the national flag is affixed to a federal building, the RCMP takes its directive from the Department of Canadian Heritage in Ottawa, and in the case of a non-federal peace officer such as Lazenby (who was granted peace officer status through the Alberta Solicitor General), the Alberta premier’s office must, on behalf of the RCMP, seek special dispensation to Half-mast the national flag at any Alberta RCMP detachment. The premier’s office obviously followed up with this, because the Department of Canadian Heritage recently posted their decision to allow all federal buildings within the Town of High River (population 12, 920 – how many can there be?), on August 24, 2012, the date of Lazenby’s memorial service.

Not only does this directive exclude Southern Alberta District Headquarters in Calgary, it prevents a handful of other RCMP detachments that actually partner with the Foothills Municipal District community peace officers from Half-masting their flag at any time, before or after the service.

This ridiculous chain of command through which the premier’s office in Edmonton must petition Ottawa on behalf of a federal law enforcement agency that is nearly four thousand kilometers away not only by-passes the interests of local RCMP Detachment Commanders operating within the physical boundaries of the Foothills Municipal District, it is symptomatic of the rusty federalism and disintegrating internal mechanics that plague the RCMP today. Deliberately handcuffing local and regional police agencies with bureaucratic inter-agency red tape not only strips RCMP Detachment Commanders of their right to make timely decisions regarding sensitive local community issues, it prevents members of the Force, regardless of rank, from publicly articulating what they intuitively know is wrong, to wit:

And after reading the way in which RCMP Commissioner Paulson blasted a senior, front-line RCMP officer for actually having an opinion earlier this week, I can’t say I’m surprised. Rank and file members of the RCMP are deemed trustworthy enough to carry a sidearm and make intelligent decisions regarding the deprivation of personal liberty, but when they wish to implement an ethical, timely and appropriate public response to a tragedy within their own communities, they are straight-jacketed by Ottawa.

Talk about taking the “community” out of “community policing.”